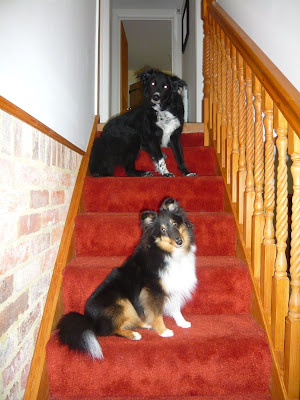 Murphy and Becky are still here but are leaving tonight. Boo hoo I will miss Mr.Murphy my main man. Itzy hero worships Murphy and he just puts up with her although she can be an annoying little Itzy flea jumping at his head all the time. I can be sure that Itzy will greet Murphy with more enthusiasm than she greets Dennis and I lately! We have gotten into a daily habit of ball throwing in the garden for Murphy and Becky and the pups. I love to see them afterwards; plum tuckered out! 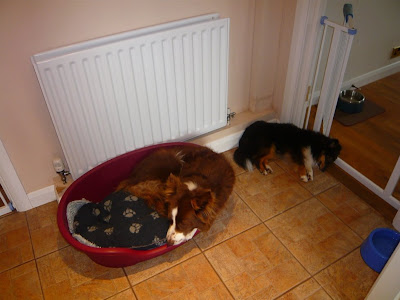 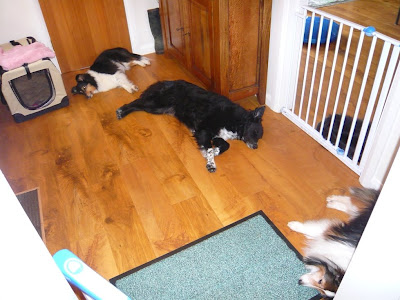 Time is whizzing by! Neil is growing and as cute as a fuzzy button. He just turned 6 weeks on Friday. I have had no time for blogging or videos but will try and put a few in just to keep everyone up to date. It is so strange having a singleton again. I watch him in his puppy pen and he keeps himself occupied. Sometimes he goes from one thing to another (I keep changing things in his pen) pulling on toys, banging the piano and then will just climb into bed and fall asleep 10 seconds later.

Itzy tries her best to keep Neil socialized. We put a cardboard box out for Neil (the best puppy toys are disposable!) and the next thing we saw was Itzy inside the box showing Neil what to do with boxes. 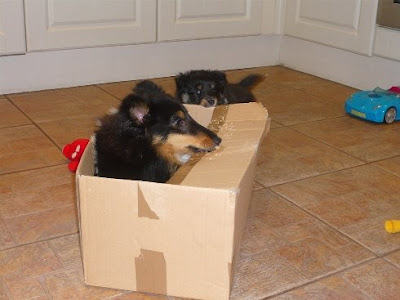 This little toy car has been such a hit with the last two litters and Neil is no exception.

Zen got a few nice gifts to congratulate her on getting to the world championships. She has enjoyed them all! This cute pink handbag is from Karen and it was a big hit but, of course, all the girls wanted it. It was HANDBAGS AT DAWN! 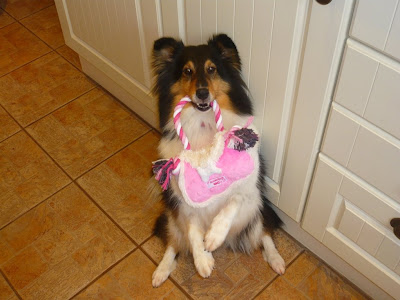 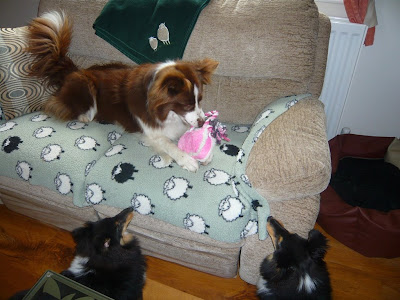 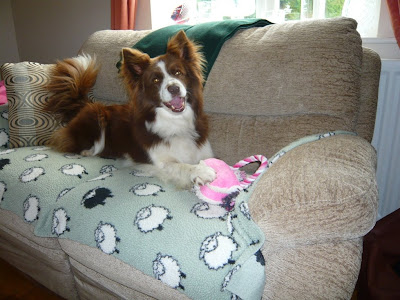 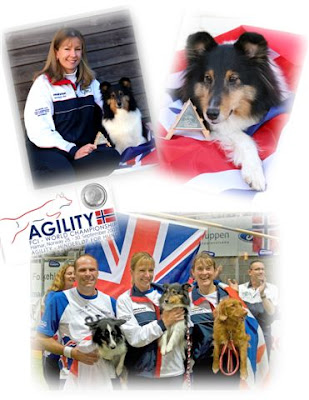 Well well well...she did it again! I was so proud of Zen yesterday when she became a member of Team Great Britain and will represent GB at the World Agility Championships 2009 in Austria.

Not only did she qualify but she came 1st overall in medium and I think she was the only dog in all heights to run clear in every round. I can't stop saying how proud I am of this little dog. This will be her 3rd time at the World Championships and she has qualified every time we tried out. Because of family commitments one year and money issues last year we were not able to try out every year, so it seems extra special now. Zen has done everything she could to help me get through this tough year; I am blessed by this little girl.

Today I will just enjoy the feeling and then tomorrow I will start thinking about how quickly the European Open is coming up in less than 2 weeks and how fast 2 months will fly by before the World champs. Yikes!

Itzy Agility Training 12 July 2009 and so it begins

Well the pups are now 7.5 months old! I guess Itzy needs to start some agility training!

To get started both pups have now had two agility lessons with our fantastic trainer Lesley Olden. We are mostly doing short sequences with tiny jumps and tunnels. Just teaching the pups the basics.In addition at home we have started playing around with contacts (dog walk and see-saw). It is fun training both puppies as they are totally different yet both fun. What I try to do is work with one puppy for 10 minutes and then take the other pup out and do the exact same thing again for 10 minutes. It helps keep my training sessions with each pup quite short and that is good.

Anyway here is a little taster of what Itzy did today. The dog-walk plank is just up on a caravan step and we are playing around with running contacts. It is my first time trying to train running contacts on my own dog so it should be quite a journey for us. We have been running the plank for about 1 month. We started on the see-saw this week. The see-saw is propped up so that it is only tipping slightly and this is Itzy's 3rd time seeing the seesaw. I am very pleased with how she progressed already.

I will try and edit Zaz's video later this week. By the time I get all my training gear out, set up the video camera, train the both pups, watch the video, edit the video and then load to You-tube I am exhausted! HAHA! Anyhoo...Enjoy!
PS if I was more ambitious I would add music to cover up my voice but I am too lazy! 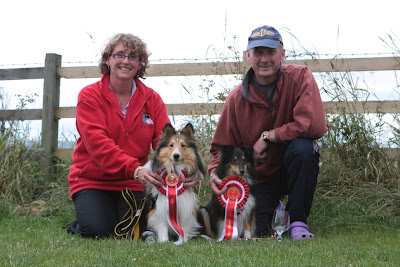 I have been lax in keeping up to date on the blog with agility results. I will blame it on the puppy; he is a time waster. Anyway this has been a good month for some of the OBay pups.

The photo above is one from last year but since I have not been at the agility shows recently this was the best I could do! Todd and Kizzy are almost the same age and both are really coming into their own this year.

Kizzy (Zen x Tazz) went into Grade 7 in style by winning those last few classes up at Lune and Barrow. Kizzy just went into Grade 6 back in March so she is moving along quickly. She just missed out on entering any championship classes this year as the shows have already closed but I am sure she will do fantastic in the champs next year. I know Andy is certainly ready to get into those champ rings next year and enjoy himself as a competitor rather than a judge! Kizzy and Andy make a great team.

Todd (Hob-b x Chi) also has gone into Grade 7 and has just qualified for the Olympia Semi-Final. Todd is just an amazing little dog. At just under 15" he competes in medium against all the larger dogs and does not look out of place with his speed and enthusiasm. Little Hob-let did good with her one puppy! I can't help wondering what she would have produced if she had been able to have anymore. Todd will be in his first championship class at the end of this month and I know he will shine.

While looking for photos of Kizzy and Todd I came across this photo take in Febuary 2007. Todd was probably about 7 weeks old and Kizzy just a few weeks older. We all met at Sue's sandschool for a sheltie puppy party. Also in this photo is the blue merle sheltie Kodak (Amanda's boy) who was about the same age. Kodak also is doing really well recently and just won a class last weekend at Bridgehouse and Surrey. Kodak is a tiny little ball of fluff with a huge attitude! 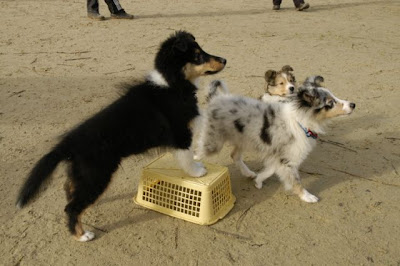 As for Zen and I....we leave for the European Open Agility Championships in two weeks! We have not been doing many agility shows lately for one reason or another but Zen is still in great shape. We went to an EO training session on Friday and Zen did not put a little foot wrong. She amazes me. Last weekend we did our first agility show in quite a long time and, again, Zen went 6/6 clear fast runs with perfect contacts! I was a happy bunny!

Here are some photos taken at Bridgehouse Agility show by a friend's husband. I always appreciate that because I know how hard Dennis works when taking photos and giving them to people. It takes alot of time and effort out of a already busy day!

I love how Zen smiles in the weaves. 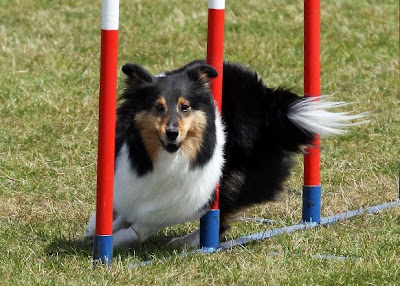 This photo shows how she uses her tail to hold onto entries. 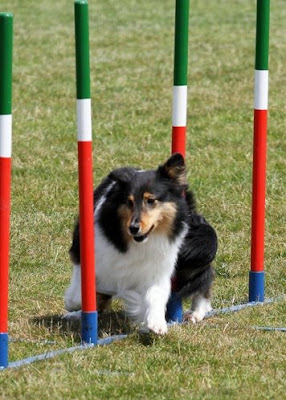 This is Zen's favorite pastime other than agility. 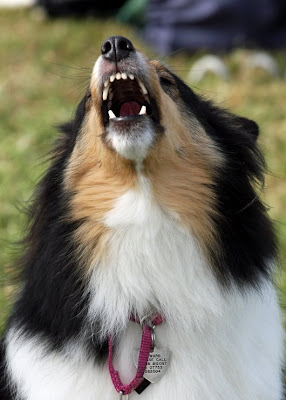 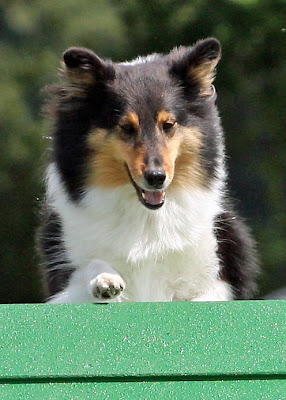 I just liked this photo! 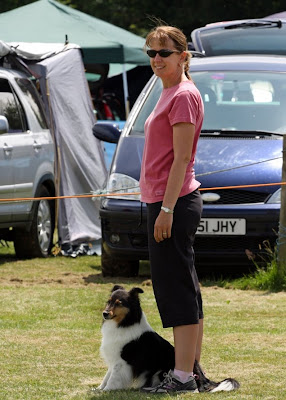 Our lovely visitors: Murphy and Becky


We have been lucky to get Murphy and Becky for the week while Nancy and Andy are in Denmark. Nandy have gone to Denmark to compete in agility at the Jutlandia Cup. I wish I could have gone but maybe another year.

Becky and Murphy are such good house guests. I just adore having a big dog (or two) around again. I don't think I want another big dog permanently but it is a nice change. What is so lovely about Becks and Murph the smurf is that they are so gentle with the little dogs. There are not many dogs I would let run with my youngsters but Becky and Murphy are so aware of their bodies and you can see them consciously avoid the puppies no matter how fast they are going or that they are chasing the ball.

I must admit that Murphy is my favorite but Becky is very beautiful if slightly blonde! She reminds me of a larger version of Jordan. 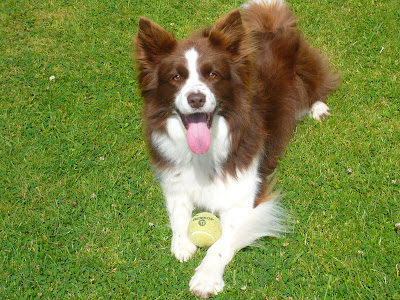 I call the border collies my "sheltie exercisers"! Zaz and Itzy love to run and chase Murphy and Becky. 10 minutes of this and I have nice tired puppies! 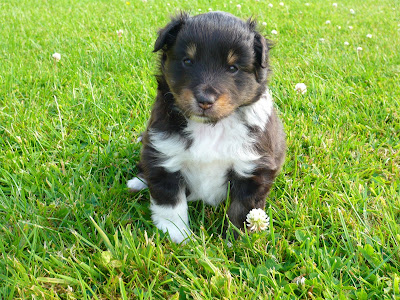 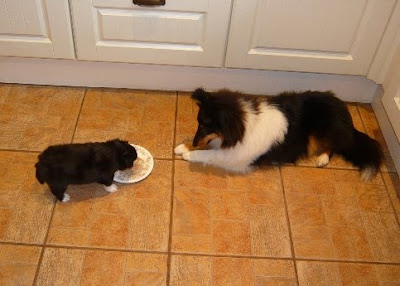 He is a regular part of the pack right now and has much more access to the older dogs than a regular litter would be allowed. He plays with Itzy and Zaz and toddles around with the older dogs outside. This week he has been introduced to Murphy and Becky; two border collies that are having their holiday here with the shelties. It is good for him to be around large dogs as well as the shelties. 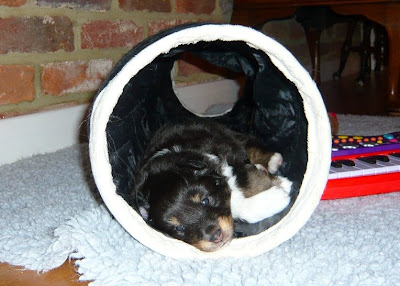 Dennis caught him sleeping; he sleeps lying on TOP of his stuffed elephant (a gift from Aunt Sonia who was disgusted at how many PINK toys he had) 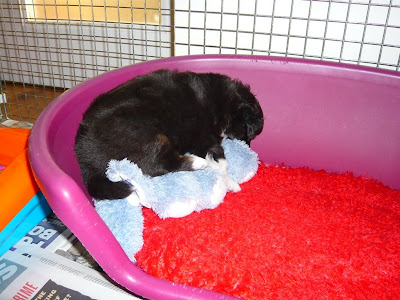 This is the time for new experiences so I try and introduce him to something new everyday. It might just be a new toy or a trip into the back garden or a ride in the car to Dennis' office. Taking the pups to the office has always been a great opportunity for them to see a new place with new noises and new people. Here Neil meets a friend named Neil! 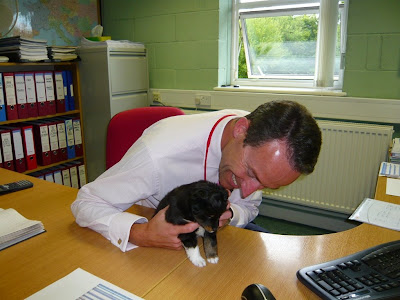 Some silly videos of our little fat boy. Here he is on his first introduction to the wobble board.

I am sure you jumped at the sound of the glass breaking! But do not worry, it was that little fuzzy green and yellow toy shaped like a hammer that Neil is checking out at the end of the video clip. It sounds like glass breaking when you bang it on the ground! It is a cool toy but I won't tell you how many time Dennis and I have jumped up when we heard it after the dogs were playing with it in another room.

Neil may be a male but he can multi-task!

Luna is wondering just what she got herself into! 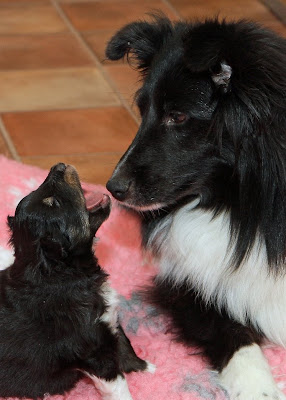