Leaving in one week!

I cannot believe that I am leaving in one week! I go up on Saturday afternoon to check into a B&B up in Hinkley and then Sunday is the training day for the team. We have to leave on Monday morning at 4 am.......ughh! I guess that means that I won't get my full-english breakfast on Monday morning at the B&B. The long drive in the bus begins and we arrive in Norway on Wednesday afternoon. Do they have Starbucks in Norway? I think I will be needing lots of caffeine!

Yesterday I set up a course based on a USDAA steeplechase course I saw on some videos. Today we set another (The Grand Prix) as it is fun to set a course after watching a few dogs run it on video. We have to eye-ball the placement of the obstacles but after watching different dogs run you get a good idea of where the obstacles are.

Lisa and I ran both courses and we were pleased with how both Zen and Chi ran. We don't do too many "tunnel under contact" discriminations so these were good courses for us to work on. I don't have those courses to put up but if you were curious you could check out this website. They take a long time to download but you can see a few dogs running the same course and it is really cool how he can overlay different runs to compare just what works best.


After that we set up another WC judge course . I haven't run it yet but am saving that for tomorrow. That long run at the end worries me a bit and I need to feel energetic to run this course. 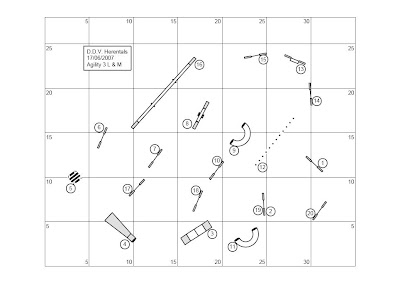 I have been trying to put some clothes aside to bring with me. I have such a hard time packing light! I am trying to coordinate my wardrobe along the same colour theme (red white and blue of course) but I do love my pink! Lisa says it takes someone brave to wear pink and red together.....he he. Anyway I need to bring my crocs and think I will be wearing them on the bus for three days. They are decorated fully now with croc "bling" so I thought I would post a photo to show them off! Please note that Hex's shoe has a skull/crossbones for her evil side but a heart and lambie for her sweet side. I do love my Hex. And if you are wondering what the flags are on Zen's side...the Union jack for Britain and the Norwegian Flag for the World Champs! 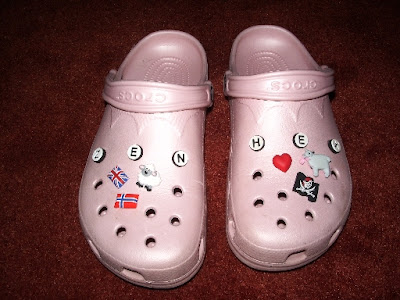 I got a lovely "care" package this week from my mate Diane in Rhode Island. Diane makes polymer clay sculptures and jewelery and is basically a super talented artsy person (so unlike me!). Anyhoo.. two years ago when Zen was in the World Champs for the first time..Diane sent me a "Don't Worry Stone" made out of clay with Zen's name on it. It is meant to be carried in your pocket and you can rub it when you are worried and presto..You are not worried anymore! Well, dontcha know it, I went to take it out this week and HOLY SHIT I couldn't find it! Major panic and a quick email to Diane begging for another one! Bless her, Diane made another one overnight and shipped it to me Priority and it arrived yesterday. I have been keeping it in my pocket whenever I take Zen out for her short training sessions and I feel very calm and focused!

This new updated version is even Gold plated! Lisa took it home tonight and promised to Reiki it up for me so it will be well charged with good vibes for Norway. Hoo-Ha!

Dennis has been practicing taking action photos and he got these two of Zen during our last practice run this afternoon. Zen has lost all her coat and is sleek and aero-dynamic! At least that is my positive spin on bringing a bald sheltie to the World championships! Here she is making me happy and doing perfecto contacts! That's my Zenny! 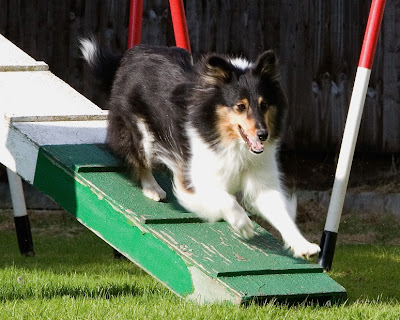 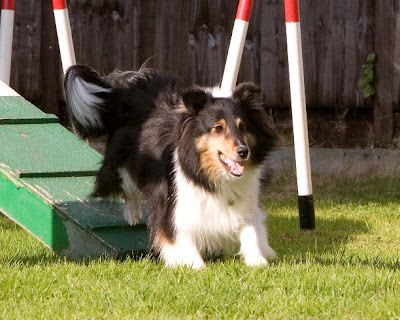 This will probably be my last post until after Norway. Thanks to everyone for their support and good wishes. I am very proud to be representing Great Britain and plan on doing our very best!

Dennis has been very creative lately. He decided that he would do shirts again for this World Championships. (He did shirts the year Johanna went and the first year Zen and I went). This is his latest design with the photos of Zen, Indy and Unique! The Championships are in Hamar, Norway... 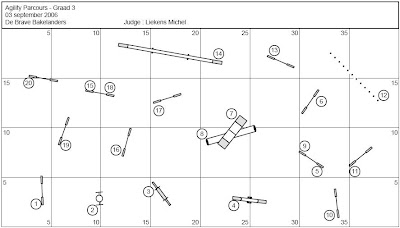 We set this up on Friday. I wanted to put up a course with tunnels under contacts as we see that so infrequently here in the UK. I also stuck a tunnel under the end of the dog walk and that added some new sequences to work with. Zen is running so well but I have to keep working on these courses so that I can keep my head in focus.
Saturday we went shopping! HA! Got my 4th pair of navy blue trousers so I am set for all 4 days at the world champs. I am starting to think about what to pack. OMG can I just wear my jammies for the six days on the coach bus?
After shopping Dennis and I took Hex and Pax to the beach. (West Wittering) It was a shame he forgot the camera as the dogs had a great time and were so cute running thru the water. It was probably the wrong day to go to the beach though as it was very crowded. Luckily the beach is so big that just by walking a little further away the dogs could have a good run and romp without bothering anyone. We will definitely go back there and can't believe we had never heard about it before!
Today we spent a few hours bathing and grooming some of the dogs to get them ready for their holidays away while we are in Norway. I like to send the dog away smelling and looking perfect. We couldn't get the pet-sitter for this time; she was booked up because I was too superstitious to book her before the try-outs! So all the dogs are being farmed out to different places. I not only have to worry about packing for me and Zen but also packing for the other 5 dogs!
Posted by OBay Shelties at 8:37 PM 1 comment:

We had another World Champ practice on Wednesday up at the team managers place. It was a long drive (3 hours one way) up to Hinkley for only 2 hours of training; but I will take all the help I can get! It felt really good to run the courses that Steve set up and be able to do them on the first try! Yeah Zen! It can be a bit intimidating with the likes of Greg D and Nicky who make everything look so easy. They are so confident in their handling and I would like to have some of that complete confidence. But I really enjoy watching the other handlers work the course with different handling as I find that I sometimes only think of one way of doing something.

But the strangest thing was that I had a really hard time leaving Hex behind. I had decided to give her a break from training for now until Norway is over and just concentrate on Zen; so I left Hex at home. Yet I felt as if I was leaving my best friend behind! Why is it that certain dogs affect us more than others? I adore all my dogs but right from the beginning Hex has been my heart and soul dog. I always said that Joy was my "heart" dog and Pax was my "soul" dog. Now Hex has surpassed both of them and become both!

Anyway I couldn't help myself and did some training with her today. Hehehe

We are going to try and set a new course tomorrow and I will try and post it when we do. This week we set a jumping course from the European open that we saw on You tube. Those two tunnels together looked really interesting.

http://www.youtube.com/watch?v=fyK-Z1h9azU
I have gone slightly insane looking for blue running trousers that are needed for our "team" outfit. I think I have gone to every JJB sportstore in South East England! I found a pair that I really like and have decided that I need FOUR pairs for the four days at the WCs. Guess how many I have...three! Why do I think that when I go back to the store that they will be sold out of my size?

Dennis comes home from Japan tomorrow. He will be zoned out with jet lag for a few days but I may have to take him shopping on Saturday!
Posted by OBay Shelties at 6:48 PM 3 comments:

Wow! Check out my blog post from back in April...I didn't even remember writing it!

Let's see now.....I cannot wait for the World Champs in three weeks. Three OBay shelties have the potential to get a medal! Wouldn't that be a breeders dream!

We had a really good training lesson with Lesley this afternoon followed by a swim at the Dog Pool for Zen. We are getting ready for Norway! I am so psyched I can't wait!
Posted by OBay Shelties at 8:16 PM 3 comments: 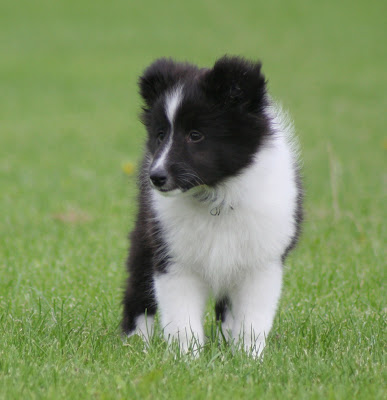 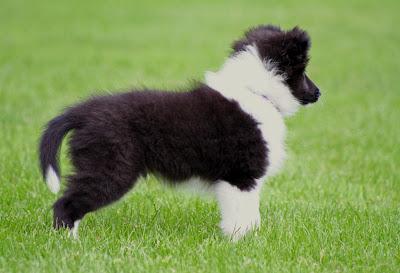 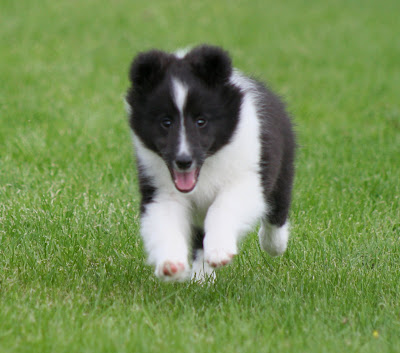 This is the bi-black boy from Monty's latest litter in Denmark. So cute!

Hex is going to Olympia!

I was abandoned by my husband who went galavanting off to Japan for who knows what... sushi, golf, hot springs and Karaoke! Isn't he supposed to be working??? So no photos, no videos... Just me and Hex all alone at the Olympia semi-finals! (yes I am looking for sympathy and hopefully some good pressies back from Japan)

A long drive up to Stoneleigh but well worth it! The short version....out of the 22 small dogs who qualified during the year for the semi-final 10 go thru to The Olympia Finals. This year 3 of the 22 small dogs qualifed were OBay Shelties AND 3 of the 10 finalist going to Olympia are Obay shelties! Hex, Indy and Timmy all qualified for the final!

Hex ran second from the end. The course was slightly tricky with a difficult weave pole entrance and a tight pull thru after the A-frame. I was so pleased with Hex's run; it was one of those special runs that just felt RIGHT. It was a total bonus that she actually won the semi as I knew that we had just done the best we could and anything else was icing.

So this year there will be five OBay Shelties at Olympia 2007. Zen and Chi in the medium and Hex, Indy and Timmy in the smalls. What a great Christmas present that will be!

Since I had no photos of Hex and her lovely crystal trophy I thought I would post this funny photo of Hex at 7 months old enjoying a glass of champagne at Olympia 2005 after Zen won! Hopefully ...as we like to say....'tis a sign! 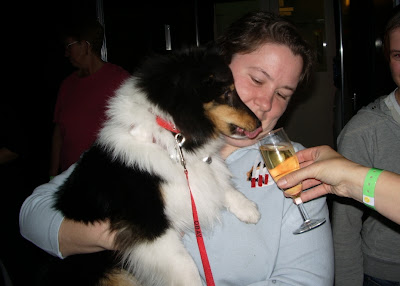 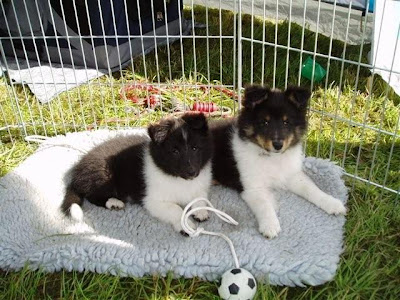 I couldn't resist posting this photo that Johanna sent to me. These are two pups from Monty's latest litter(I think 5 were in the litter) in Denmark. Isn't that little bi-black girl just yummy? And the tri boy is a spitting image of Monty at that age.

I always guessed that Monty was bi-factored but the bitch's owner didn't even know her bitch was bi-factored and the bi-black pups were a suprise!
Posted by OBay Shelties at 5:59 AM 6 comments: