I have been doing agility for nearly 17 years and I finally got around to trying  to teach weaves using the 2 x 2 method. You can't say I rush into things!

It was fun trying this method with Yay. I  decided to give it a try it because the weather had been so awful and I didn't want to take her into the wet training paddock to do a lot of running.  I decided that I could just set up some stick in the ground poles right outside my backdoor and step out for  few minutes each day.  The first few  days were very frustrating; when I went from 2 poles to 4 poles I thought she would never get the idea and I was frankly about to give up. So we took a 2 day break and when I brought her back the next time it just seemed to click and the progression from 2 sets of 2 poles to 6 straight up went really quickly.

This video was taken when she was at 8 poles. Not so easy videoing and trying to get your 10 month old pup to weave. HA! So  the video quality isn't professional and my  rewarding could be better but you get the idea.

I have been amazed at how quickly she learned to weave straight up poles and she has some wicked  entries learned already.  I am not sure I love her foot work through the poles or her little jump at the last pole but that could be the result of my rewarding incorrectly. We started her with a thrown toy while the poles were open but went to thrown food as we progressed.

Yay can now do 12 poles straight  up and I will honestly say the amount of time spent on the weaves has been 1/3 of the time I would normally need to teach poles. She has not done many repetitions and I know she will need more work on things like cross behinds and my running past as most of the repetitions have been done with my standing still.  I will go back and review the 2 x 2 DVD and see where I might have skipped steps and start adding a  jump before the weaves as my next step.

I am so happy that Yay loves the game of agility already; she is great fun. I  think we are both ready  to begin the next stage of training: Running Contacts!  Fondly known as "self-imposed manic depression" and I can't wait to start!
Posted by OBay Shelties at 1:10 PM 3 comments:


I had a little hiatus from  running agility last year but am excited to get back to competition this year. I have been thinking about the new trends here in the UK and the USA. More "European" handling seems to be all the rage. I love new things but it takes me time to let it all sink in. I am basically happy with how my dogs run and our successes but there is always room for improvement without losing what I already know.

Anyway.....one of the things I keep in mind about agility is that it is NOT rocket science. It is a little bit of fun that we have with our dogs.  I  try not to take it too seriously while at the same time remain competitive. Does that make sense?  I love to talk agility, talk training and get together with people who love to do the same. I love to delve into why things happen and why some training/handling works for one dog and not another.  This is the same reason why I love reading the blogs of trainers from other countries. Especially the trainers who break things down and speak of their highs and lows rather than just write a blog to "sell" something. I have learned so much over the years for free by doing this! Yes free agility information!

I was thinking of about all that yesterday on the ride home from Giz-mo's first agility show. Having two young dogs now gets me  back into training mode and I love that.  So I was thinking about all the trainers in Europe and the US that I would love to train with but cannot afford.....

So I would offer this proposal to any trainers who would like to come to England to either run agility or just to sightsee in our beautiful country. I have a lovely home in the beautiful English countryside with spare bedrooms that is dog friendly. We are only a 1 hour train ride to London. I have an outdoor agility paddock for training right outside my door. If you ever want to come over for some fun in England I would be glad to help you out with organizing your agility trip and give you a room for free in return for a 1/2 day of training a small group. I cannot offer big US or European training fees but could possibly organize another small training day to help your expenses. I am not looking  for the "top" trainers that want/need to charge $$$$ but just looking for those who love agility and enjoy sharing their knowledge. Maybe you regularly read my blog and have even watched my videos and learned something yourself. Or maybe you have watched my videos and thought "oh I could  help her!"  Of course,  if someone who charges $$$$ wants to come I would love to have you! LOL

The Kennel Club International Festival is in August and is still open for entering. Crufts is in March and we have agility shows all summer.

So this is just an idea. Contact me if it sounds interesting to you! obayshelties@hotmail.com 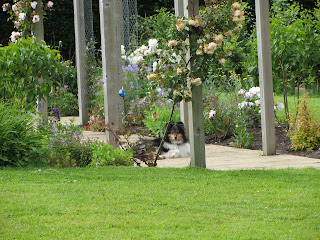 With a little help from alot of friends a little ball of sable fluff joined us last September. 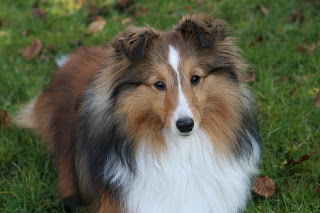 It was a long journey on the search for this puppy. I had a few breedings of my own  that failed to produce or just produced boys. Then I had the possibilities of a puppy from other breeders that just didn't happen: either through not getting pregnant or just producing larger pups. It seemed like I was never going to find my little girl! I had my heart set on a sable girl but honestly would have taken any colour by that point!

Then I heard of a breeding to a dog that I have admired for nearly 8 years after meeting him as a young dog at a Clean Run camp in 2005. I loved this boy so much that I had plans to breed Hex to him. I had visualized that breeding as crossing two of the most perfect shelties. Sadly that never happened but I kept in touch with his owner (an old friend) just in case he was used at stud with a nice bitch.

So I contacted the breeder in Kansas and happily found myself on the list for a puppy. I was happy that the breeder had similar ideas on breeding and she knew I was looking for a smaller girl. The pups were born and I was feeling optimistic as there were two girls. Then tragedy struck and one of the girl pups died at only a few days old. So sad for everyone and I just assumed I was not getting a pup again... Then my luck finally turned when the breeder offered me the one remaining girl. I was so excited and began to plan the difficult process of importing a puppy into England. It is hard to believe but this would be my first puppy bought from another breeder in over 20 years! I had gotten used to breeding my own pups and knowing my own lines. It took a leap of faith for me to let go of the worry that not only was I not raising the litter but also I would not be getting the puppy until it was nearly 4 months old due to import restrictions into the UK.

How could I not love this puppy? 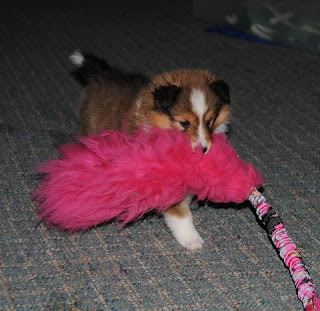 I flew from England to New York to  Kansas to pick up Yay when she was 8 weeks old. She then flew  back with me to New York where I spent a week with her. I hoped that this week would help to bond us together and allow me to start some puppy training. 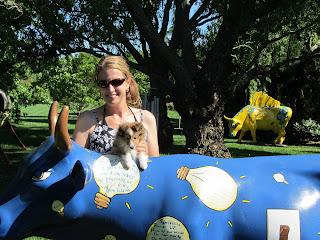 Yay never left my side for that week. I was amazed at how  fast she learned tricks and so pleased with her tugging and play. She was the perfect puppy!  I cried when I left her a week later....
Luckily my lovely sister agreed to keep Yay  for the 6 weeks it would take to get her rabies injection and then wait the required time to do the paperwork necessary to import her into the UK. Not only did she take care of her but she also continued her training and socializing. I had a list of things for her to do with Yay and would speak to her every week asking if Yay was still playing and tugging. How annoying I must have been!
Yay had other helpers in New York. Friends and family who helped train her, let her out during the day when my sister was working, leash walk her and even friends who helped train those sheltie ears! How luck am I to have such friends and family? It  takes a village to raise a puppy! 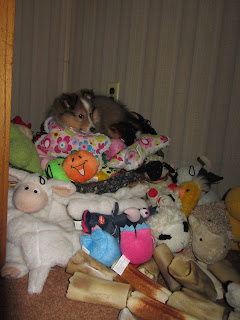 It seemed like forever until I returned back to New York to pick up 15 week old Yay to bring her home to England. Of course things wouldn't be as simple as just flying into England; that would be too easy!  The only way you can fly into England is to have the puppy in cargo and I wasn't prepared to do that with my puppy. I wanted little Yay at my side the entire trip. 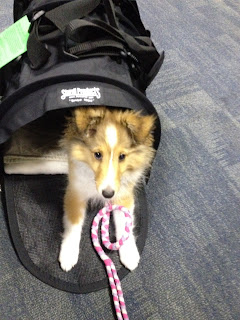 So this required a flight from New York to  Brussels followed by a car ride through Belgium  and  France to get to the Eurotunnel.  Dennis drove from England to Brussels to meet us and on the same day turned around and drove us all back home. Another epic trip!  What a fantastic husband I have!

Dennis was going to take a photo of me and Yay after we passed through the Eurotunnel Pets Passport office. This never happened because after this amazing long journey and the worry of all the paperwork I burst into  tears as soon as we  walked out of the Pets Passport office! The relief of knowing that Yay was finally  mine was overwhelming.

I don't know what the universe has planned for Yay and I. I just know that I absolutely adore her and look forward to our journey together. I don't think I have ever enjoyed a puppy so much. She fits into our family perfectly and I see her and Giz-mo as my Yin-Yang. (or sometimes just as double-trouble!) 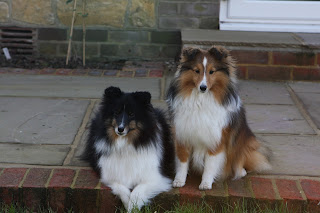 Yay is so meant to be mine. When I first found out about her it was because I loved her sire. Then I found out the most incredible thing....Yay's mom was related to Zen and Hex through their mom True.  Yay's great great grandmother was also Zen's grandmother!  Now Yay was able to bring me back to the fantastic genes of our gorgeous True. 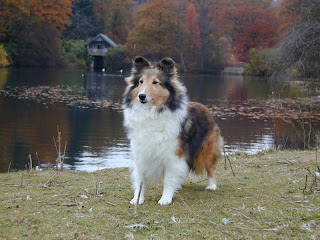 And finally her name: Damask Jump for Joy at OBay is because she reminds me so much of my very special dog of a lifetime: Joy. 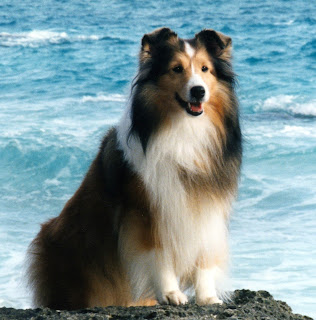 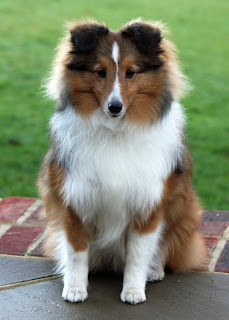 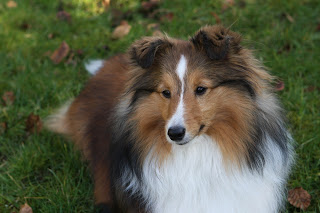 Yay is now almost 11  months old. Agility training has begun and we are loving it!