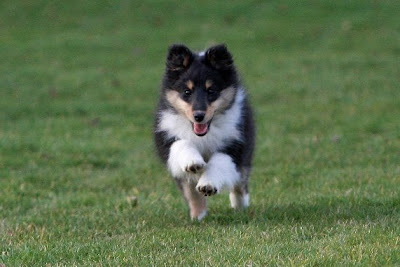 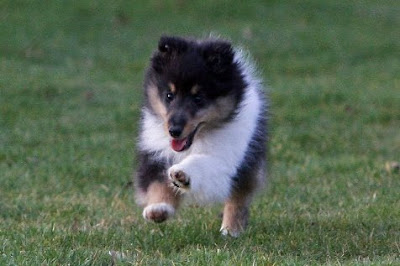 Like most people with new pups I sometimes wonder if I am doing the right puppy training or enough puppy training. You cannot help but compare to other "wonder pups" especially on some of the other blogs out there. There is nothing to make you feel more inadequate than watching some of these videos on You tube! Tell me please...how come all of these fab trainers are 25 years old, gorgeous Europeans and have super wonder pups that are usually border collies? Sigh....

I just have to go back to what I know and try to do what comes naturally. I find if I over-analyze or over-plan,I just start procrastinating! I recently saw a good motto which said something along the lines of "perfection is the purest form of procrastination". Boy oh Boy does that fit me to a tee! So I am trying to not over perfect my puppies!

Zaz and Itzy are just two totally different characters. Each have their strong points and weaknesses; I just try and tailor their training to their individual needs. In order to have enough time to train each pup I have started to use their meal times as their training sessions. I do not normally do this although I know "hand feeding" is often a recommended training tool. I am doing it with these two pups just to be able to plan their training sessions, play sessions, sleep sessions and socialization sessions without running out of daylight!

We start a little puppy basic obedience class next week. And the breaking news is that Dennis has agreed to come and train Itzy while I train Zaz in the same class! Hurrah!It should be interesting to see if each pup can concentrate while the other pup is working AND concentrate on one of us at a time!

Along with their short clicker training session; I try and do restrained recalls and running with each pups whenever I can find someone to hold the pup. I try to do the running and chasing with a toy so I keep the toy drive alive in each pup. This is the hardest part as using the food is so much easier/quicker but I know I need to keep playing with the pups to try and get more enthusiasm out of their training. 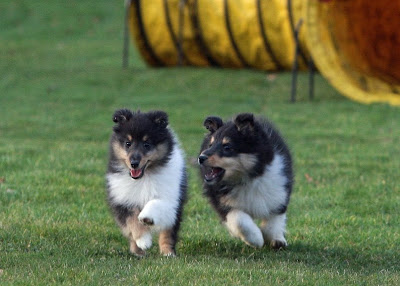 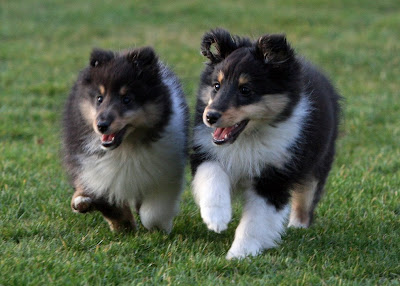 I try and get little training sessions done where ever we go. So, for example, if we do some walking though town for socialization I will bring treats and do some downs or rights/lefts. When I take Zen to agility class I go early and bring each pup out for 5 minutes to watch and get rewarded for not barking and lunging. (easier said than done!) Nancy kindly leaves out some "props" like wobble boards and cones and I do little sessions with each pups. Rights and lefts on the wobble boards and little sends around cones; all easy and fun but with the distraction of other well-behaved/trustworthy adult dogs working near them.

Here is a little video of Itzy training. Ahhh she is so cute. I will try and get video of Zaz up during the week. 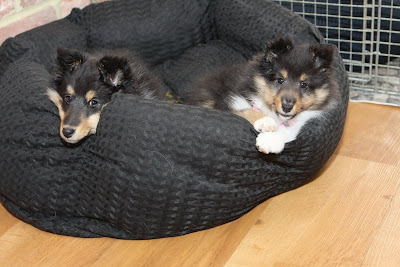 Most of our time is being spent on socializing the pups. This is hard work and often involves walks on the beach, sitting at cafes drinking lattes and lots of window shopping. Oh yeah and some standing next to cannons. 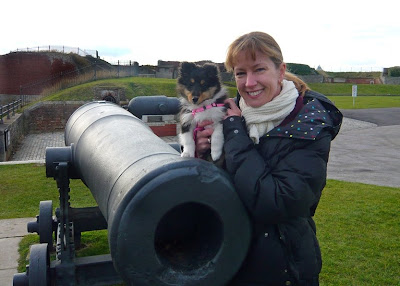 Dennis and I took the pups this weekend down to Portsmouth and Gunwharf Quays. It is an outdoor shopping area on the waterfront. It is a brilliant place to walk the pups with loads of people, different noises, stores and cafes. I wish I had the camera when Dennis was surrounded by about 8-10 teenage girls squealing with delight over Itzy. I heard them coming and took off ahead of Dennis and he got caught in the teenage wave! 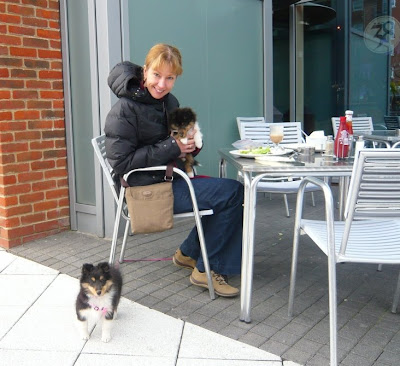 Last weekend Sonia and Bob took me and the pups down to Worthing beach. They had some good socialization and had some experience walking along a busy street. Sonia and Bob's shelties (Barney, Sam and Lucky) are great dogs to introduce to the puppies as they are so gentle. 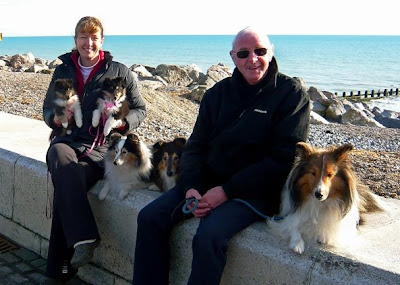 It was hard work so we had to stop for coffee! 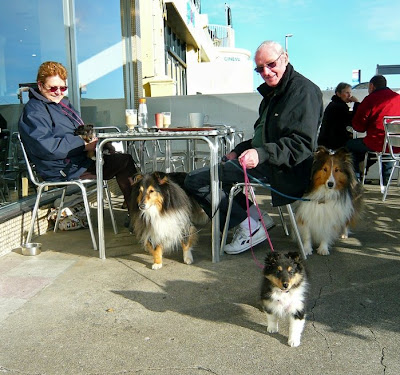 I have decided to go to Crufts with Zen. It was a difficult decision for me. I still am not sure I will be able to deal with being there without Hex. Hopefully running Zen will help give me back the joy of agility. We will be competing on Friday and Sunday.

Zen looks awful as she is going through the major shed that happens to bitches after the puppies. She is fit though and she has been swimming for the past two weeks in addition to her walks and some balance work. I ordered with "Fit Disc" for her and we have been practicing her "sit up beg" on it. It looks easy but for a dog like Zen who moves at 100 mph it was really hard. We are working on her changing position from a "sit beg" directly to standing on her rear legs and back to a "sit beg"; all on the Fit Disc. It hasn't been perfected yet; but I will try and get a video this weekend. 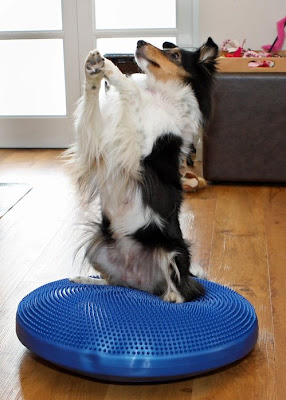 The puppies must be growing as they are outgrowing their puppy harnesses. Zaz has now passed her pink harness down to Itz. The red harness the Itz is wearing in this photo was a hand-me-down from Zinna. Considering the red harness is now too tight on Itzy; she must be bigger than "The Mouse" was at the same age. 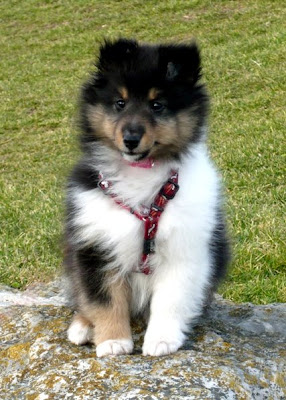 Zas in her pink baby harness. This was the last day she could wear it and it is now a hand-me-down to Itzy. 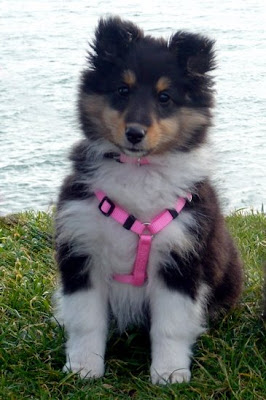 I know I should be posting training videos of serious stuff but we haven't been too serious yet! This may blow my image because along with "selling puppies for thousands of dollars" rumour there is also the "trains her puppies to weave at 8 weeks" rumour.
Posted by OBay Shelties at 7:05 PM 9 comments:

I am not sure why I am signed up on Facebook; I just accept friends (hey everyone needs more friends!) and generally ignore it. Sometimes you receive notices about things and this weekend I received a notice that I was "tagged" in a photo. Huh? I wasn't sure what that was and it is different to when we tagged bloggers last week.

It seems like someone downloads photos and if they know names of people in the photo they add the name in and the photo get "tagged" with our names. Also if someone else sees the photo and knows someone in the photo, they can add the name. If the person is on Facebook or is one of your friends,they somehow get notified about the photo. Someone downloaded photos of an old school yearbook. It was weird looking at my photo and seeing other photos and names that I didn't remember until I saw them again. Personally I found Junior High and High School a bit of a blur and I think I have erased it from my memory! Isn't that strange? 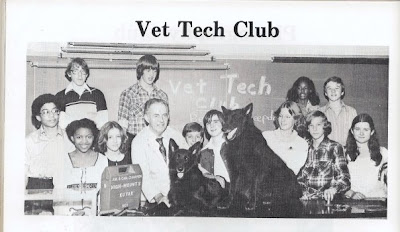 Then I saw this photo! I had forgotten all about this. I guess I was meant to be a "dog person" after all! I was 12 years old in the photo. I think I joined this "club" because I was having a tough time in the science class due to having been in catholic school for the previous 8 years. (Science and Math was not a big emphasis is my catholic grammar school.) I needed all the extra-credit points I could get by joining this "Vet-Tech club". This was our science teacher's "club" as he must have been a Belgian Sheeepdog breeder and exhibitor. The club actually did nothing except take this photo. It is amazing that years later my main university emphasis was science and math and I not only loved it; I was good at it.

Once he invited us down to a local breed show (at Hofstra University) which many years later I attended regularly! So I must have been influenced without realizing it! I remember going down to the dog show and really enjoying being around the dogs. I remember finding the teacher and being offered a can of coke and being invited into his motorhome. I remember thinking it was weird that he had this motorhome and wouldn't go into it. Now, these days I would be jealous of that motorhome! Life is certainly a circle! 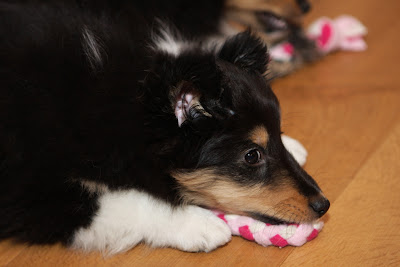 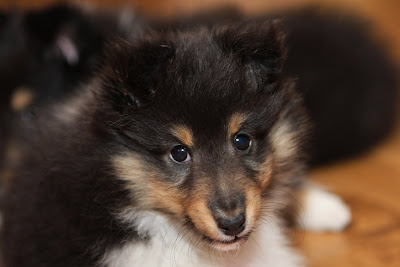 So things slowly are getting back to normal. Well as normal as things can be with 2 puppies.

Each pup needs different things right now in their trips out. Zaz has to learn that people can touch her! She hates to be pet by strangers; she will look at them like they are crazy "How dare you touch me?" is the look she gives them. She has better things to do! Itzy is more outgoing with strangers but is not so keen on walking any distance. A few short sessions on lead and then she puts her bottom down and doesn't want to go on. Oh, except if there is a child running by and then she wants to chase chase chase! Lots of work needed on that!

Dennis cannot go anywhere without me handing him a puppy to take. Zaz took a trip to the shooting range and Itzy spent an afternoon at the office. Dennis has gone back to New York this week....I wonder why?

We did not get the snow that the rest of England had. On Monday morning we got just a dusting as shown here. By Monday afternoon it had melted. Yet just 10 miles away they had 6-12 inches. Strange weather here that's for sure. Not that I am complaining; I had enough snow in my life in New York and the novelty is gone. 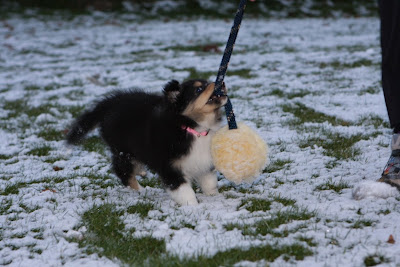 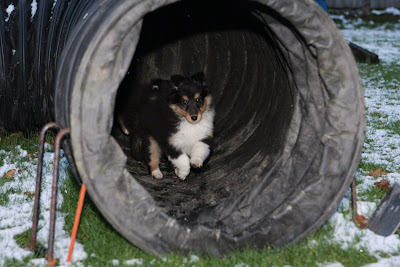 This is Pork Chop in her new home. Her new call name is "Zavvi". As usual, I will have trouble remembering the names! Everyone has been so good in choosing unusual names. We have Itzy, Zaz, Yaz and Zavvi! Try and say that three times fast. 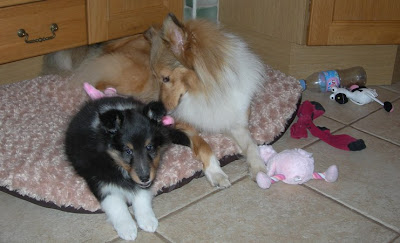 The pups got their first puppy injections yesterday. I watch them closely afterwards for any reaction as I have had puppies who reacted to the vaccinations. At the same time; Zen was due for her rabies jab to keep her Pets Passport valid. I wasn't watching Zen as closely because she has had multiple rabies injections before and had no problem. Well......look what happened 2 hours later. Yes AFTER vet hours. Why don't I listen to myself and do the injections in the mornings?

I did speak to the "on call" vet who,when I told her what was happening, responded with a high pitched "REEEEAAALLY?" Uhhh, no not really, I just called you to pass the time! Arghhh! Luckily I immediately popped two antihistamine (Benadryl) down Zen's throat and about 1 hour later the swelling had slowed down and started to slightly improve. She was almost normal by 1 am and boy am I tired today!

Her muzzle and one eye swelled quite alot. You cannot see it on the photo but her lips were very thick. Not Zen's most attractive photo but I wanted people to see what a reaction sometimes looks like. 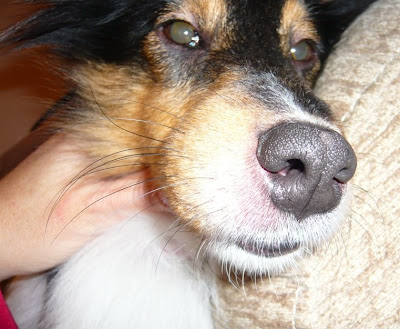 How could I resist this photo? Zen and her mini-me Itzy. 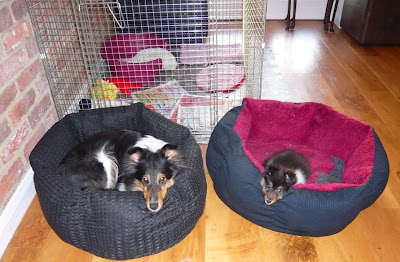