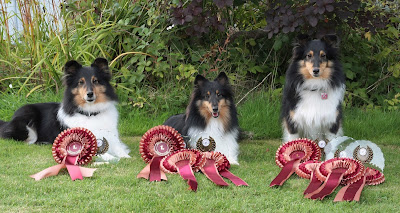 We competed this past weekend at Stour Valley. It is a nice small (6 rings) relaxing show. Just park me close to the rings and I am a very happy bunny! Add in beautiful weather and nice people and that is the perfect agility show for me. As a bonus Dennis actually came with us on the first day!

I was expecially looking forward to competing with Zaz. Zaz and I have not competed since July except for the Olympia Semi so I knew we would be a little rusty. This was her first show at Grade 6 and luckily there were two Graded 6 classes (rather than grade 6/7 combined) so I was hoping we could get a win towards Grade 7.

We started out the day with our jumping class which just went WRONG. It was like we just could not get ourselves together. So the best thing to do was to sit around and drink coffee, eat breakfast and chill while waiting until our agility classes were ready to run. In the afternoon we got our mojo back and thank goodness the agility classes went much better. Zaz ended up winning 2 agility classes on the Saturday and one on the sunday. 3 wins towards Grade 7 and only one to go! She came close on Sunday to winning the fourth class but ended up 2nd in a tough jumping class.

Itzy had a really good weekend also. We made silly errors in our Graded 5 classes so unfortunately she did not move up to Grade 6 this weekend as I had hoped. But Itz was running like a little Itzy Bitzy bullet! She is the type of dog that is rather steady in training but speeds up in competitions. This makes each run quite a suprise for me! She did get one jumping win and came 2nd to Zaz in a combined 4-7 class which was pretty awesome for my little Itz. What made that 2nd place even more impressive was that she had to run the course twice. The electronic timing did not stop in her first run. This meant that although she ran clear she had to run again from scratch. Running from scratch when timing fails is probably the fairest way to handle the situation. Of course it does not feel fair to the handler (me!)at the time but the alternative (running for time only) is not really fair on the rest of the competitors. This is the 2nd time Itzy has failed to stop the time in her short little career to date! I think the electronic timing is just dazzled by her cuteness and forgets to stop. LOL

Here are Itzy's two runs over the same course. I am not sure if the first or second run is actually quicker. Either way she was so darn cute!

Here is Itzy running the second time. I was worried that she would be slower from being tired as we only had a few dogs in between for her and I to get our breath back. Her startline is getting as naughty as her sister Zaz which means I am consistant in teaching naughty startlines. GGG

Zaz running the same course but just once!

Another agility course from Saturday.

Zen had a good weekend also. I only ran her in one agility class per day just to proof her contacts. On Sunday she did the most perfect contacts and won her class. This was a great way to end her last show before the World Championships.

I still have so much to teach the Zitzy twins. It is hard to believe that they will be 2 years old in December yet I have only been competing with them since June. They still seem so much like babies to me. With past dogs I have felt that they were grown up and mature by two years old. Zen was in her first world championships at just over 2 years old. But not these two! Maybe it is because they turned 18 months (age they can compete) during the middle of the season and so they did not have as many compeitions? Or maybe it is because I am training two of them at the same time? Either way it is so exciting because I feel as if we all can keep improving!
Posted by OBay Shelties at 10:49 AM 7 comments: 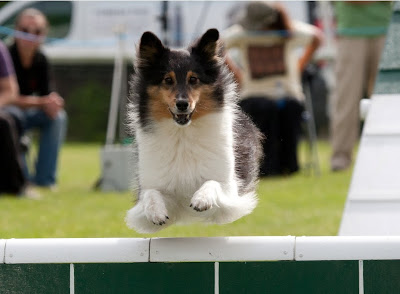 I was really looking forward to the Olympia Semi-Finals this year. I was competing on both Friday and Saturday with Zaz and Zen. Zaz had qualified back in July at the Agility Club show. I figured we had a month of competition to fine tune our teamwork but that was not meant to be. It turned out that the Agility Club show in July was Zaz's last competition until the semis arrived this weekend! So although I know my little dog is special; I also knew that our partnership was a little rusty. I had to keep reminding myself that she qualfied by placing in the top 3 of over 150 dogs so she had the potential.

So Zaz and I arrived on Friday morning hoping but not expecting. Thank goodness for the warm-up run as it proved to be a little hit and miss for Zaz and I. Some good things came out of it; her contacts were spot on and she was being very responsive. The warm up gave me a good idea of how she was running. She was not running full out and she was watching me quite a bit as well as barking. I admit that after seeing the final course, I made a decision to run her cautiously in the final. I knew that the course would claim many faults among the 33 dogs that had qualfied.

The good news is that Zaz and I are going to Olympia 2010. I had mixed emotions as the last time I was at this semi-final was when Hex had qualified there for Olympia 2008. I then lost her only one month later. And losing Nanette only one week ago made it hard to get excited about a dog show. So maybe my joy at qualifying was not as strong as it would be otherwise. Don't get me wrong I was happy to qualify and so very proud of my little dog but it was just not as important to me as it should have been. Or maybe that is the way it should be? Maybe we all take this little game we play with our dogs too seriously.

There were two other OBay shelties who qualified to compete in the small semi. Nicky and Indy put in their normal quality run and have also gone through to the Olympia Finals. Elizabeth and Ziga were competing at the semis for the first time and came oh so close to qualifying. A small error put them out of a finalist position but we know they will be back next year to try again! 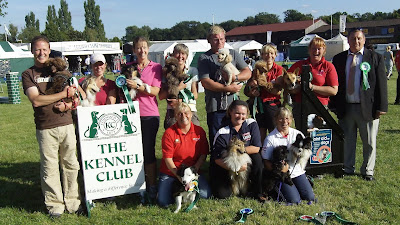 After the small semi on Friday I spent the night at Nicky's new house about 1 hour away. Nicky had moved into her house last year and, like us, has a hard time leaving her gorgeous new house! I can now see why as she has the most fabulous house with adjacent agility field all set in the middle of a forest! Why would you want to leave? We could walk into the forest and walk for miles right outside her front door. We got back late so I just took the dogs for a quick walk and after only a 5 minute walk came across this beautiful lake. I only had my Iphone so this photo is not great but it gives you an idea of the peacefulness of the area. 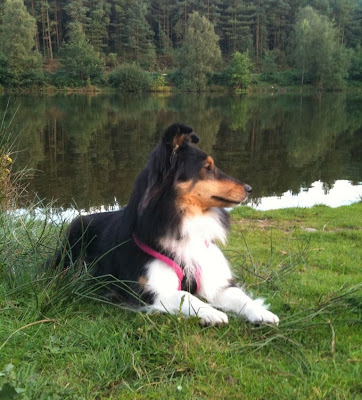 Zen was competing the next day in the medium semi-final. I had no expectations for the medium competition because of the large number of border collies and border collie crosses that had qualfied this year. Zen has nothing to prove to me; I know she is the most awesome dog possible! She gives it her all and runs her little legs off for me but I knew it would be down to the course design. A straight forward course with straight lines would be our downfall. I left the showgrounds excited on Friday as the courses on Friday were challenging. These were just the type of courses we needed for Saturday's medium competition.

We arrived on Saturday to another bright and sunny Stoneleigh. The good weather combined with close parking and lots of vendors makes for a great day at any dog show. The warm up went well with Zen getting 4th place. She was running well and I was pleased with her contacts. I was suprised at the simple course but as it was the warm-up I was not overly concerned. Then the final course was set and we walked it over lunch. I walked it and walked it and still could not find any place where Zen and I could shave off any time. It was a very straight forward course and it would just come down to pure speed. I must admit I was very discouraged. I had to take myself away from the course and the other handlers and just sit with Zen and re-group my thoughts. It would have been terrible to go into that ring with my awesome dog already thinking that we were not going to make the top 10. I was tempted to just leave at that point as I do not ever want to run my dog with negative thoughts in my head.

Once I gave myself a good talking to and again realized that it was up to me to enjoy the course not matter what it was. Zen and I could enjoy the course even if we did not qualify. I hope we attacked the course as well as it felt (no video!). I do not think that Zen could have gone any faster.

No video but we did get this fabulous photo from Alan Score of Zen during the semi. 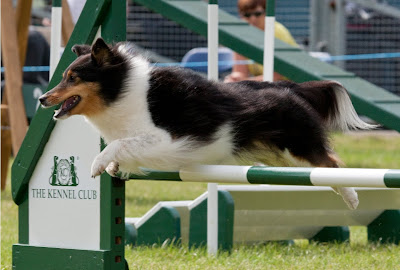 In the end Zen did qualify but only just! She came 9th and the top 10 go through. We very nearly did not make the top 10 but the last few dogs made uncharacteristic errors. Sadly the only other OBay sheltie, Todd, ran a beautiful clear but ended up in the unenviable position of 11th place. Just out of qualifying which was so disappointing for Karen.

It was nice to spend Sunday at home relaxing. Dennis is away in Japan so the dogs and I just put our feet up and chilled out in the garden. Read some books, watched some videos, picked some tomatoes and runner beans and even did a little bit of training with both pups. Ahhh... heaven.
Posted by OBay Shelties at 10:00 AM 1 comment:


Sadly last week we lost a special person in our lives. Dennis' sister Nanette lost her battle with cancer. It is hard to accept that she is gone; her time on this earth was not long enough.

This photo of Dennis with his brother Richard and his sister Nan was only taken 6 weeks ago.

Cherish your family and friends.
Posted by OBay Shelties at 7:50 PM 2 comments: