Here is Zaz with her celebratory sheltie cupcake! I won't say I bullied Leah into making it but I think I wore her down with my requests! 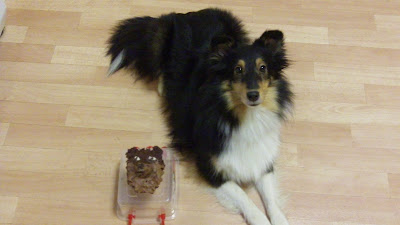 So as you can probably guess Zaz did good!

There is a new "World" Agility competition being started by Greg D. et. al after the success of the IFCS World Champs last year. The WAO (World Agility Open Championships) is a really interesting idea and I was glad to be able to try-out with both Zen and Zaz.

After Zen competed at the IFCS World Champs, the European Open and the FCI World Championships last year I decided not to do anymore International competitions with her. Luckily the WAO is here in the UK so I thought it would be a good one for the both of us. I especially thought it was a good opportunity for me to do some interesting courses with Zaz as I really want to get Zaz ready to participate in the EO and the FCI World Champs this year. We have lots of work to do to get up to scratch but I know that she has the potential if I just get off my butt and do more training.

The WAO is using the same height classifications as the IFCS. These are really good heights for Zen as the height cut-off and jump height is 15.75 inches. Since Zen is 15" this puts her nearer the top of the jump height and gives her a much lower jump than the FCI jump height of 18". I love to see her jump the lower heights as she looks so much more comfortable. There are no jump height classifications that will please everyone for different reasons. There will always be dogs at a disadvantage either because they are jumping a higher height or because they are competing against much bigger dogs. For once Zen is at the advantage with this height division so I am happy! LOL

Unfortunately Zaz is at the Disadvantage for the WAO. At 13.5" tall she is jumping nearly 2.5" over her normal jump height and competing against dogs that are 2.5 inches taller than her. Now Zaz is a great height for FCI because she is at the top of the small jump height. So two different dogs with two different ideal agility organizations. Variety is the spice of life!

I had been really focused and ready for the try-outs when they were originally scheduled back in November. Then they were cancelled due to the big snow storm that hit the UK. The try-outs were rescheduled for January and I have to admit that (like most of us) there was not much training for me in November,December and January. Added to that we had just returned from our trip to New York; so we were definitely not at the top of our game!

As with the previous IFCS experience, I found these WAO try-outs to be a good experience. Very well organized and a good atmosphere. For the life of me, I do not know how the ring party and the judges dealt with the cold arena! We all were able to chill out in the enclosed warm cafe area that overlooked the main ring but the area/ring was FREEZING!

We stayed at a nice B&B for the weekend. The only issue was that because we booked the room late we ended up in the attic room! But it was clean and dogs were allowed.
We had a little heater in the room for extra heat and Zaz obviously thought it was a sun bed! 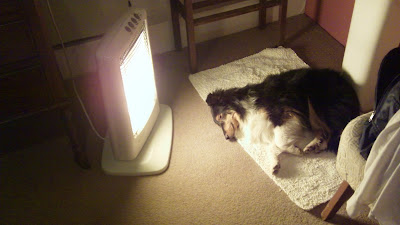 Zen just chills out in any hotel room she stays in. She must be the laziest sheltie in the world. 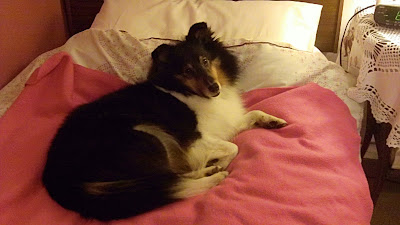 So onto the competition. It was broken down into a Biathlon (agility and jumping) and a Pentathlon. The overall winner of each event would be guaranteed a spot on the team. Since I am pretty late in writing this post; I cannot remember all the details; but basically Zaz ended up winning the Biathlon and this guaranteed her a spot on the team! She had some difficulty with the jumpheight; I did not feel that she was running at full speed and she crashed a double and dropped a few bars. But overall I was pleased with her as I did not ever feel as if there was something she could not do. She had a little hiccup with her see-saw and it is something that we need to work on: getting her on a larger variety of see-saws.

What I did have trouble with was running the two dogs back to back. Unfortunately we had to run in the order drawn and there were quite a few absentees which put Zaz and Zen running one after another in quite a few rounds. I did NOT enjoy this and do not know how some of our UK handlers do this weekend after weekend. These were large spread out courses and even though they did not rush me into the ring; I still found that I "hit a wall" about 1/2 way through my second run each time. I wasn't even out of breath; I just felt my legs give up and I felt as if I could not run anymore. My mouth stopped working and I just could not give clear directions. Not good!

Here are two of Zaz's runs. I was not focused enough to have my runs taped on Saturday but remembered my camera on Sunday. Thanks to Jay for taping and for his commentary!

So Zaz was automatically on the team. Zen and I had some issues during the weekend and we did not get an automatic qualification. Luckily I received a letter the following week offering Zen a spot on the team! I accepted with the caveat that I run each dog in two different events; I did not want a repeat of the weekend running the dogs back to back. So Zen will be running in the Pentathlon and Zaz will be running in the Biathlon. I am really looking forward to being part of this new venture and so excited to have Zaz in her very first International competition!
Posted by OBay Shelties at 3:27 PM 6 comments: 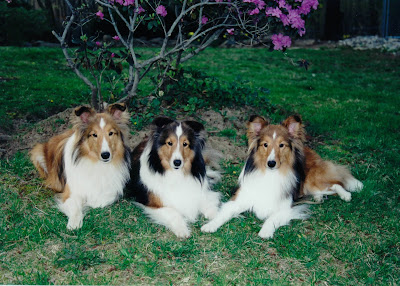 Back in January Halo and Presto turned 11 years old. It is hard to believe that the "twins" are 11. (l to r: Presto, Jordan, Halo)

They were Jordan's two pups born by c-section. Boy oh boy that was one long night. After waiting for Jordan to deliver we finally rushed her to the vet at some ungodly hour in the morning convinced that the puppy in the canal had died. Little Jordan just would never have been able to whelp the two pups that weighed almost 1 pound each! Those were two big puppies! We were so happy when the vet came out and said he had TWO live pups.

They were two great pups; easy going and happy. A litter of two is so simple. Both Halo and Presto have Jordan's loving sweet temperament. I miss that happy Jordan very much. 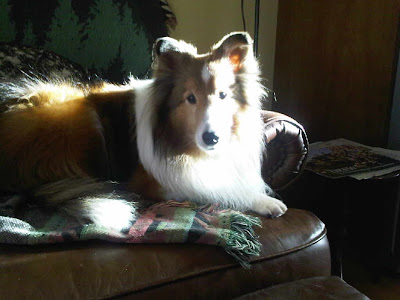 And Halo at 11 still competing and loving life. 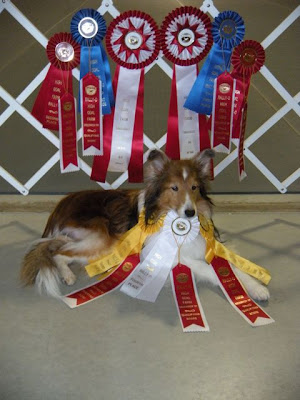 This past weekend I organized another Obay training day with Lesley Olden. It is a nice chance for me to see some of the pups all together. One day I would love to do a day and/or weekend with ALL the OBay pups but I think that may be a impossible task. First we would have to organize everyone and second we would have to find a place far far away where no one can hear us. Maybe one day; I can dream!

If nothing else it gives me a good photo opportunity!

The dogs are all at slightly different levels in training so Lesley sets us up simple sequences that she can time as we try different ways of handling. This helps to see what is the quickest way for our own individual dogs rather than comparing dog to dog. Here is the jumping sequence tried a few different ways.

Me and the Itz

During the second half I worked with Zaz.

And Karen worked with Yazz.

It was a shame that the only pup I did not get on video was Ziga. It was hard to video as well as keep The Zitzy twins quiet! We also missed not having Zavvi (Zaz, Itz and yaz's litter sister) with us as Marilyn had a family emergency. Hopefully we can all get together again. Christine's husband Marc stepped in to take Marilyn's spot and trained his poodle Mr.Big. I am happy to note that Mr. Big was probably noisier than the shelties! Hurrah!

It was a really good day followed by a yummy pub lunch. I am thankful to Lesley for letting us come to her nice warm school and putting up with the noisy crew.

I am especially grateful for all the wonderful caring owners that share their lives with my OBay pups.
Posted by OBay Shelties at 10:20 AM 1 comment: