We have been preparing for losing Pax since October. I knew from July that there was something seriously wrong with her but it took the vets until October to figure that out. Bladder cancer. The worst part of this disease was how Pax's mind and heart was so strong but her body was failing her. Right up to the end she had a great appetite and her mind was active. She still wanted to be with me and I wanted to give her every chance possible to stay. Yet when the day came; I did know it was the right time. On that morning neither Pax nor Jordan got out of their beds when I came downstairs. I sat with them on the floor, one on each side of me, for hours that morning. Pax was, as always, on my right side with her head turned towards me.

I can hardly remember life without Pax. Our journey together was so much fun. We did so much together; showing in breed, obedience, herding, agility. She gave everything her all and I loved her for that. The only thing I was never able to do was to get a puppy from Pax. At around 1 year old she starting having seizures and we thought we were going to lose her when she went into a seizure that lasted for hours. She came out of those episodes and, except for the occasional partial seizures for the next 3 years, she was healthy and never needed medication. That was a dark time when all my thoughts of a future in sheltie breeding was over for me.

Yet instead of proving herself as a mother; Pax proved herself as a fun working dog. Precision and self-control were not necessarily her trademark but she barked her way around the agility ring and occasionally closed her mouth long enough to do a great round in obedience. When she barked in herding I knew her naughty side was coming out and there might be some sheep wool in her teeth! We learned so much about herding together; she could show such self-control and balance at times that it would make me just tingle. That feeling of total "one-ness" of dog, handler and sheep. In obedience she just could not hold back that one bark which would make me laugh as the judges frowned and marked us for that. I preferred her expression of joy and could care less about points lost. In agility she barked the entire course and I never noticed as I was having too much fun.

Pax was totally 100% MY dog. She was my right hand and my soul. Yet it was because of Pax that I was never able to bring in any other adult bitch to our home. Jordan was the only adult sheltie girl that she accepted into our house. She took an extreme view on any other sheltie; True and Hob-b had no chance! Once Pax decided she hated another dog; that was it for life. Pax never did anything by half. Yet I loved her anyway; flaws and all. During the last year of her life I was so happy to find that little Itzy made Pax happy. I had not seen Pax play with another dog like that since we lost her mom Joy.

From the day she was born into my hands and I nick-named her "Bad Girl" to the day I layed on the floor and let her go, Pax loved me and I loved her. How lucky was I?

Throughout her time with us Jordan was a ray of sunshine and a sweeter sheltie would be hard to find. She came to me during a difficult time when I was very sad about Pax's illness and she brought much joy to our house. And now, as if it was always destined to be, Jordan walked side by side with Pax to the Rainbow bridge. Thank you Jordan...we love and miss you.

Until we meet again 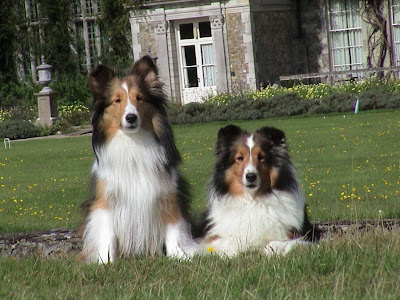 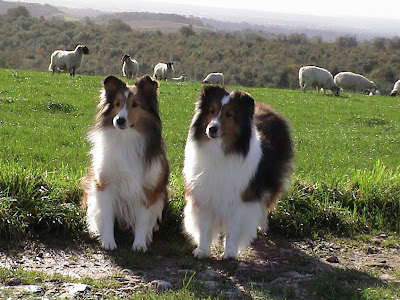 For us this is a tremendous loss. I am still in disbelief and our house feels empty. My only consolation is that for Pax and Jordan there is no more pain and they are together.

At the end the vet asked if they were sisters and, although I said "no" at the time, I was wrong. They could not have been more like sisters. I could never have imagined losing both of them together; up until one month ago Jordan was not even ill. In some strange cosmic way I believe that Jordan knew that Pax needed her.

My three gorgeous girls Joy, Pax and Jordan are now together somewhere running and barking with abandon. Goodbye my sweet girls; until we meet again. 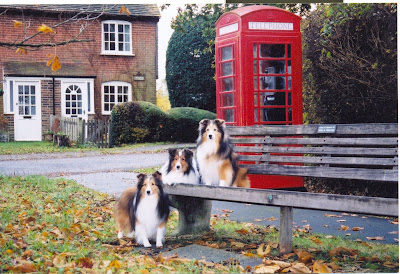