Tracey; one of our groupies! 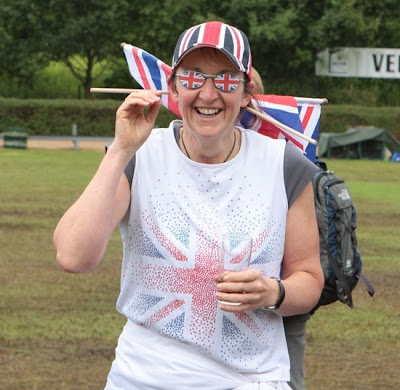 Greg taking a photo of Dennis taking photos. Notice what is in the other hand. Drowning out his sorrows? 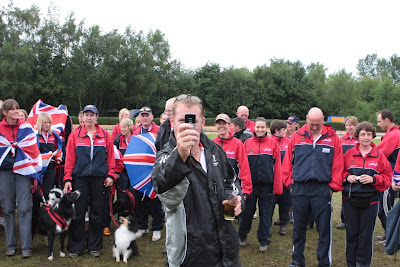 The fact that the EO has four rings is good and bad. Good as we get more dogs running and get through more dogs quickly. Bad in that you CANNOT watch all your team-mates run. Everyone did their best to run around from ring to ring; but it was really impossible.

After all the team runs on Sunday; it turned out the one of the large teams had won BRONZE! Hurray for the youngsters aka The Brat Pack.(Lee, Katie, Marc and Anthony) They really deserved it and they all ran beautifully. I hate that they all can run so fast though! Darn kids! ha!

The rain continued on and off; the main downpour being when my team was in the jumping ring! And the second big downpour being right around the closing ceremony time. I was gutted that the rain was so bad and it messed my hair up big time. I tried to fix it but Dennis and Sonia both suggested a hat for the closing podium photos. Boo-hoo. How the heck did Katie and Leah keep their hair so perfect for the photos? 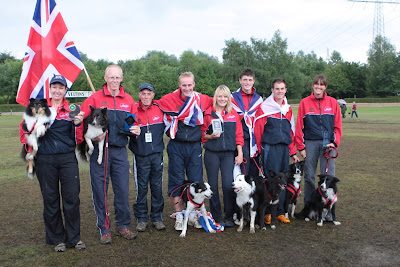 Andy won the jumping individual so he got a trophy for that. Surprise! He was not informed that he would get a trophy and a chance at a podium photo. So instead of just going up for the applause and photo by himself; someone suggests he take a substitute dog! How ridiculous is that? Now all the world (well anyone who took a photo) thinks Andy won medium individual jumping at the EO with a cocker spaniel! 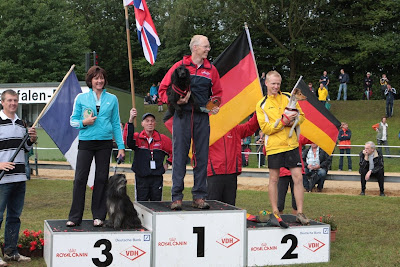 Notice the dog in the 2nd place is a SHAVED sheltie! Yuck and double yuck! Lovely dog to watch run but WHY shave it?

This gorgeous cocker gets around though; here is Lee Windeatt wishing he had a medium dog himself. Or maybe if he had a nice medium dog he wouldn't get into so much trouble? 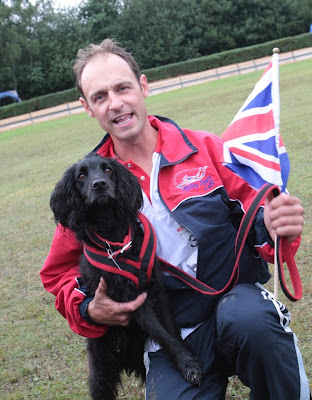 Here are some podium shots. The large team podium shot would have been so much better if those french winners did not have such loud stripes on their shirts! It clashed with the lovely union jack flags! hehe Plus, I have already been getting emails from single American women who would love to meet some of these guys! 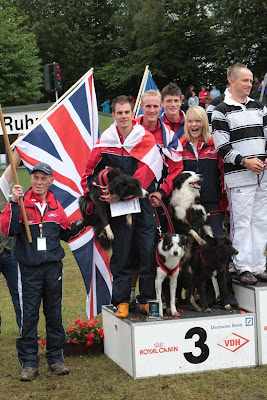 This lady won a silver medal in the individual large with her lovely rescue dog Herbie. I am not sure exactly who she is........hehe. Just kidding it is Leah and Herbie; we wouldn't forget you! 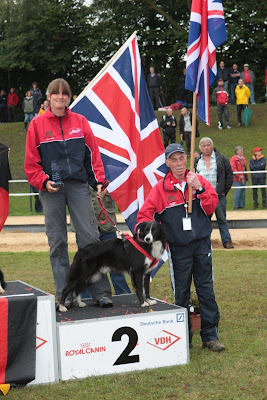 And just because it is my blog: some more photos of me and Hex! I like this one because you can see the rain drops (it was raining pretty hard by that point) and also you can see my skull/crossbones lucky socks! 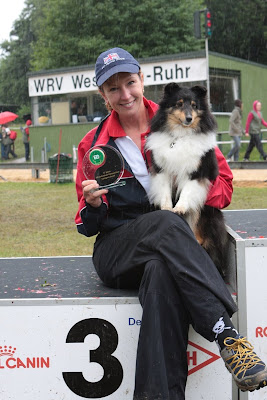 Thanks to Natalie for this photo. It is very artistic! 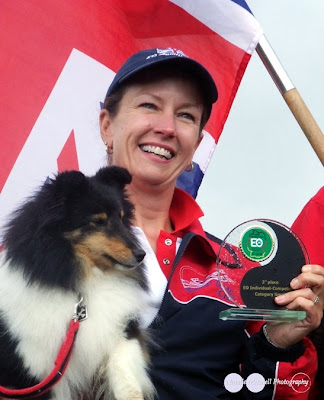 So that is it! I will not go into details about the loooong ride home or the idiot coach drivers who thought we would get through Calais port without them checking all the dogs! Sigh...

Thanks to all my team-mates for being such good sports. And congratulations to all the winners! Next year....Gold? :-)
Posted by OBay Shelties at 3:10 PM

I lurve the shaved sheltie look, perhaps that could be the new Obay standard ;)

Thanks for writing all about it as it captures the atmosphere really well even though some parts were rubbish you can feel that everyone felt they were a team.

Wow that is a gorgeous cocker!!

Your write up is fab!

I will never forget Jon-Jon the worst navigation device on the market!

Really enjoyed reading the reports - thanks!

Can't believe this is the end of your writing about the EO. Really enjoy reading it. I have read somewhere that SHAVED sheltie, Caja has a skin problem so she has to have all her beautiful coat removed!!