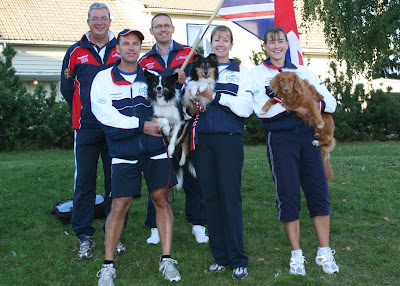 We got to the venue on Thursday afternoon and it gave us a chance to settle into our team changing room. Steve was worried about what the room would be like as it was labelled as a "wardrobe" on the form. Ha! The KC had to pay extra for this room but it was well worth it. It gave the team a chance to have the dogs away from the general commotion and a place for us to put our stuff away safely. A place to review the course maps, nap and eat away from the general noise off the hall. Dennis took a photo of me napping between runs on Saturday; but that photo will NOT make the blog!
The room was small but it had it's own toilet! Result! No queueing for the toilets! It also had showers which should have only gone on if people put their hands over the sensors.....so ideally you could crate your dogs in the shower area also (that is what the Danish team did and it gave them more room for people). But, noooo, not the British....some of our teammates (names not to be mentioned) had to go into the shower area and try out the sensors! Hmmmm, a few people got wet and no one wanted to crate their dogs in there after that!
Our team was extremely lucky to have our own Team vet with us. Peter Van Dongen was worth his weight in gold on this trip. Without going into details he saved us on many occasions! Here is Pete working his magic hands on Zen. Between Pete and Lisa massaging Zen for me; she was well relaxed. 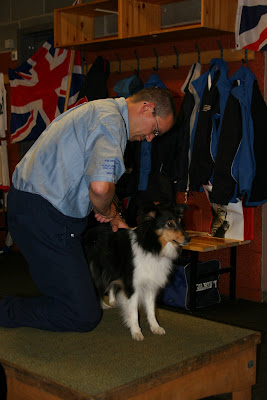 After we got to the venue we had to have our official vet check by Norwegian vets. This was followed by some measuring. This is the first time they have measured dogs at the World Championships and I think it will not be the last......Zen measured well in and the measurer joked about how small she was. There were rumours flying around about many dogs from different countries measured out but still allowed to run. I think this will be discussed in the FCI meetings in the future. Having had many borderline dogs in the past I am well aware of how stressful measuring is for handlers of borderline dogs. Dogs are NOT statues and, as with humans, can vary in measure from hour to hour and day to day. Anyway, all our mediums were measured and allowed to run. They did not measure our smalls (although Nicky was worried as Indy is ONLY about one and one/half inches under the measure. HAHA Enough to fit another dog in practically!)

As we checked out our "wardrobe" Steve brought us in our number "bibs" which needed to be worn anytime we were in the ring. It makes it easy for the spectators to see who is running. Well.....these bibs were just a little bit small and made for some funny moments. Luckily the bigger men had good wives with them who were able to cut the bibs and re-sew with some string. This is what they would have looked like otherwise! Alan was planning on running without his shirt and he would have looked good doing so! Dave...well....I think the judge would have been laughing too hard to judge him! 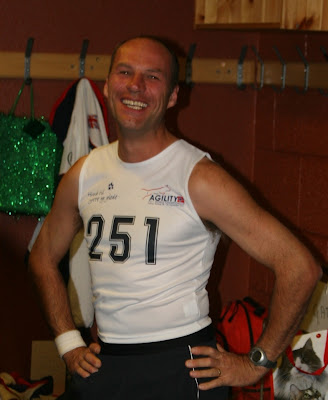 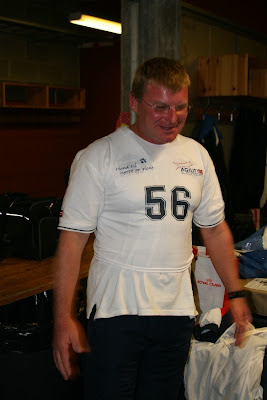 After these checks we got ready for our team practice session. Each country has an allotted time to practice and they are very strict. Steve organized the sessions to maximize each dogs time in the ring. They split the ring into three sections so that each height team was practicing at the same time and then we rotated into each section. Our training session started at 4:44 pm and was exactly 18 minutes long! As Steve prepped us, he told us that our training objectives were:

I really enjoyed the training session. I did not feel rushed and Steve and Gwen's preparation was spot on. Zen initially slipped on the running surface but after the second sequence she sussed out what she needed to do. I did not rush around training but focused on her stays and rewarding her with her toy. (They did not allow food into the ring). It was a positive and fun experience which is just what we needed before our competition over the next three days.

Dennis finally had his chance to work on practicing taking photos in the venue and trying to figure out the lighting. The lighting was tough and he had to be very creative. He spent hours and hours taking photos, downloading photos, reviewing photos to decide what to change ect ect. I think he should have been paid! What a star he was!

After the practice we tried to get some team photos. OMG how difficult it is to organize this motley crew. The first group of photos did not come out great; but here are some of them. Notice we are missing one team member (LAUREN......) and it is near impossible to get these people to look at one camera all at one time! 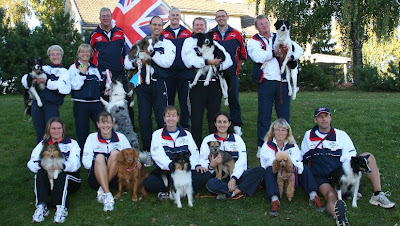 Posted by OBay Shelties at 2:07 PM

Great photos. Looking forward to the next chapter of this story please!

I think the 'napping' photo should definitely be published. You cannot tell us about things like that and then withold. Unfair.