The Long Journey Home from Norway 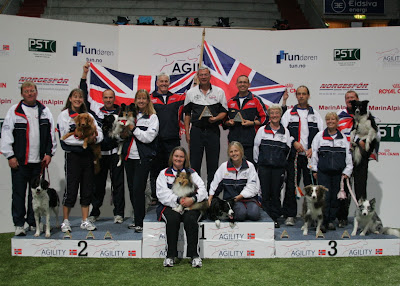 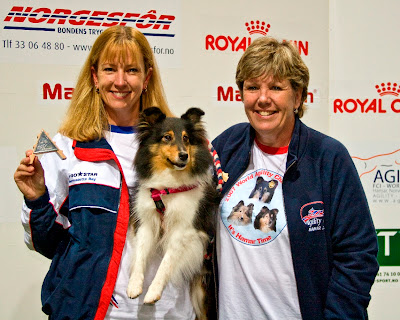 Sunday night after the closing ceremonies and the podium standing; I finally got to go out to dinner with Lisa and my sister Terry. It was a nice meal although it started out weird with Lisa asking the waitress for "whale steak".....don't ask!

We arrived back to the hotel in time to share in a glass or two of champagne with the rest of the team. The entertainment this night was Lee Windy demonstrating the "Power OF SILAS" and the new agility moves that will soon be sweeping the UK. Ask Lee about "The Spinning Blind" and "The Samurai". And specifically ask for Greg to play the dog; who needs entertainment when you have that?

The next day all the adrenalin was now gone and the reality of another long coach journey set in. I won't talk too much about it just to say that poor Zen was in her crate on the coach for almost another 48 hours straight with only stops of about 1/2 hour each. This was made worse because we slept for two nights on ferries. So while we slept cozy in the cabins; they slept in their crates on the bus.

It was a great experience overall; but I would never subject my dog to that kind of travel again. Next year (if they send a team) I will want to know the exact travel plans first before I try out.

I couldn't have done as well as I did without everyone's support! Thanks to everyone who sent good luck messages and good luck pressies! And to everyone who watched the rest of the OBay shelties while we were away. And thank to Dennis, Terry,Lisa and Johanna for being there with me. You all made the whole experience extra special.
Posted by OBay Shelties at 6:13 PM

Well if Zen becomes a bonsai sheltie from being stuffed in the crate you can enter her as a mini next year. Scary thought...

he he seen the spinning blind and other moves demonstrated before very funny !!!

The spinning blind is actually a ketshker - so named after the German who inadvertently invented it. We've been doing them at Addicts since 2004 (and falling over our feet on occasion in the process, too).