Dennis found this Corrour To Rannoch walk listed in The Sunday Times a few months ago and decided we should do it when we were up in Scotland. It turned out to be fairly local to our cottage so we picked a non-rainy day to try it out.

The walk consists of a train trip up one station from Rannoch station to Corrour station. You leave Corrour station and walk back through Rannoch Moor to get back to the first train station.The first train station "Rannoch" is quite pretty and it turns out it was used in the latest Harry Potter movie for some scenes. I am not sure which ones as I do not watch Harry Potter, but there you go! The lady at the cafe said they would be filming there again next month for the next film. We had a snack at the cafe while waiting for the train to Corrour.

Corrour Station sits at 1,350 feet the highest station in the British Isles. There is no road in or out of the station making it the most remote train station in the UK. It also had some significance in the cult movie "Trainspotting" but really do not know as I have not seen that either! So two train stations with movie references and I have not seen either one. Anyway,there were only 4 of us who got off at this station (Dennis and I and the german couple) and when the train pulled away...WOW.. it was really remote! We were surrounded by moors and hills and silence.

The day before, after mentioning the walk to our hosts at the cottage, they said maybe we should to do a shorter walk about Loch Ossian and then get the train back instead of the walk from Corrour to Rannoch. When we got up in the morning we had pretty much decided to do as they suggested. That was until we got to the train station and found that the next train back was in 6 hours. The walk around the Loch wouldn't take longer than 2-3 hours so we would have to kill 3 hours waiting for the train and there is NOTHING to do at Corrour station.

Then we talked with a German couple who were doing the Corrour to Rannoch walk and I think they talked us into it or maybe they shamed us into thinking we were being lazy! Either way we opted for the longer walk. At least since they got off the train with us we were able to get a photo of Dennis and me together for once! We did not take Zen on this walk because I did not want to have to deal with THREE dogs on the train. 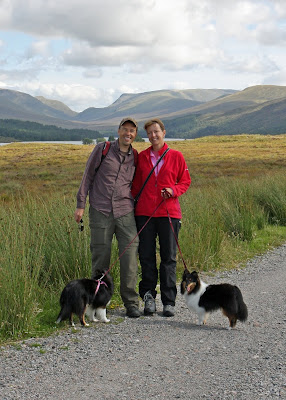 The fact that there was a Loch Ossian youth hostel at the Loch made me think that there would be something around to kill some time....haha....can you actually find the hostel in this photo? 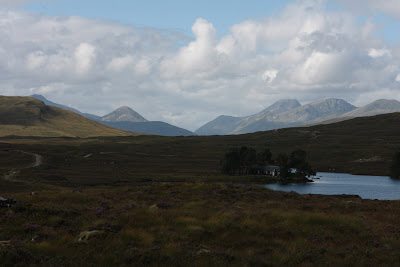 This is Loch Ossian. It was another stunning Loch. There were quite a few points during our 12 mile walk that I wondered why we did not just walk around it!

We made the decision to do the 18 km walk back down to Rannoch Station instead of the shorter walk around the Loch. I am now glad we did it but there were points along the walk that I thought OMG what the hell have we done?! The German couple started out ahead of us and seemed to get so far ahead. We were slowed down by me (slow walker), Dennis (taking photos) and the pups having trouble crossing streams. There had been alot of rain previously so the water was running fast in spots and the going was tough with loads of slippery mud! I kept thinking "please don't let me sprain something before the World Champs! Priorities you know? haha

Here at the start of the walk. Can you find the Germans already miles ahead? Luckily she was wearing red and we could spot them along the moors at certain spots. Eventually we needed the binoculars to find them in the distance; it became a game of "spot the german lady in red" for most of the walk until they got too far ahead to see anymore. They must have completed the walk in 5 hours while it took us 7 hours! 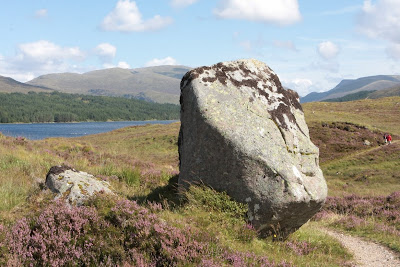 Just another stream and waterfall to cross with two pups and trying not to have the water go over the top of the boots! Zaz and Itzy actually got pretty brave about crossing these streams and bogs but I worried about them getting caught between rocks while jumping across. 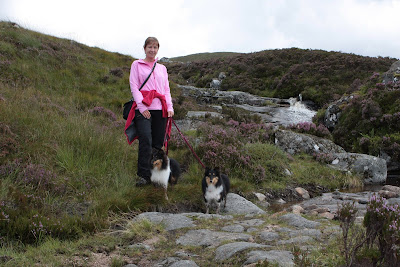 This was one of the first markers along the walk. A sad tribute to a young man who died at Loch Ossian. After that there was no real markers other than the view of the Germans miles ahead of us over the moors! At some points during the walk I was loudly cursing those German walkers for getting us on this walk! 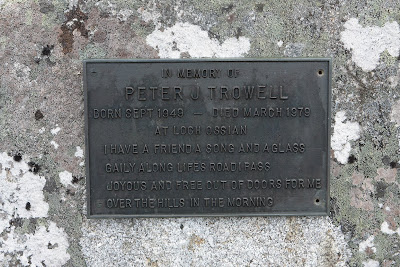 Some photos to show the huge expanse and loneliness and loveliness of Rannoch Moor. 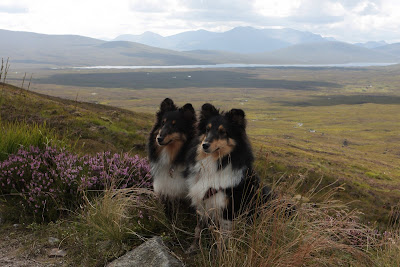 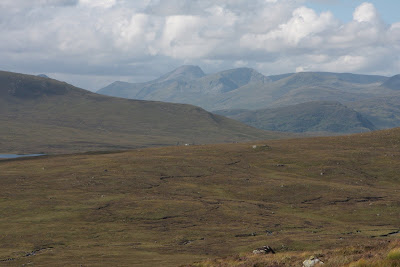 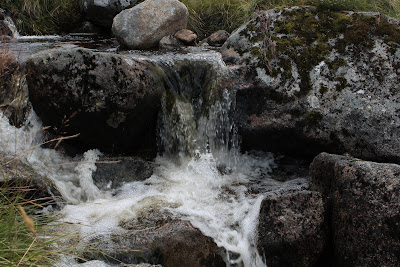 Another landmark during the walk. A ruin of an old Scottish hunting lodge. We stopped there to have our "lunch" which were yummy scones that I luckily picked up at Rannoch Train Station. Meanwhile those Germans never stopped walking! I do like my luxuries like scones and jam eaten while sitting on a rock on a moor. 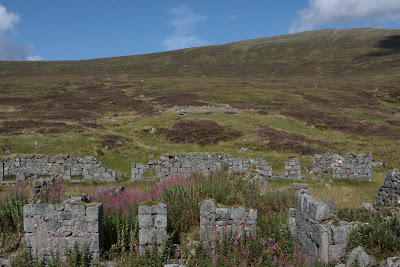 Other than Peters stone and the hunting lodge it was just a matter of keeping to the wet boggy "track" which at times was hard to see. Some of the walking guides said "stick to the path as the water logged moor is rumoured to swallow people whole!" And then I started thinking about "American Werewolf In London" movie where they say "stay off the moors at night"! I can scare myself very easily without help from anyone!

Luckily we emerged from the walk onto the road and were very happy until we realized we still had another 1.5 miles to walk along the road. 7 hours after we set out and that last mile was the hardest!

We got back to the cottage tired but happy we completed the walk. I stopped cursing the Germans and was proud that I made it through the entire walk. I was also so proud of the pups for their first time on a train and their first really long walk. All in all a good day!
Posted by OBay Shelties at 7:56 PM

Funny when you mentioned the moors on the phone the first thing I thought of was American Werewolf in London...Yikes!
The pictures are amazing - the puppies & Zen are absolutely beautiful :-)

Who looked after dear Zen whilst you were out on your marathon? The pups did really well didn't they ! It is certainly beautiful up there.

Ohhhh looks lovely, but slightly scary!! I'd be scared of getting lost.....or stranded....or murdered....Haha. What kind of murderer would be hanging about there on the off chance?! I am such a wimp with on overactive imagination!

Gosh- 7 hours of WALKING! That is a lot. I would have been cursing those Germans for sure.
Thanks for the pretty pictures.
Cadie

Thanks for the pictures.Brave puppies!

Thamks for the pictures. Brave puppies!