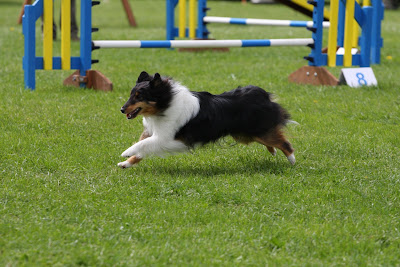 The weekend after we returned from Germany I headed up to the Shrewsbury Agility show. It was a long trip up for a one day show but I really wanted a chance to move Zaz and Itz up a grade. Zaz just needs one more win to go Grade 7 and I wanted to get Itz into Grade 6. I have missed so many shows with Zaz and there are not many shows now until next year. As this was a dedicated small/medium show I thought it would be worth the drive.

I stayed at a beautiful B&B and I had the entire place to myself! The B&B was so pretty but it had cream carpets and cream duvet covers so I was so worried about muddy doggy footprints. As I had to wipe their feet everytime they took a step outside; Zaz and Itz were not as impressed with the B&B as I was. We woke up to a fantastic hot breakfast and headed out to the show which should have been only 15-20 minutes away. It is a beautiful part of the country and I would love to go back for a longer visit.

I had never been to this show before so I used my Sat Nav with the postcode given on the schedule. Unfortunately this did not take me to the show site and I drove around for over 1/2 hour trying to find it! I had to keep stopping to ask people if they knew where it was. There were no details on the schedule and it said just look for the sign; but it turned out to be the world's smallest agility show sign. LOL When I finally could see the show site; I could not figure out how to get in! There were closed gates and I could see the show site down the hill. I pulled up to the gates and turned around looking for an open entrance. Then after more driving in circles I met some local people and they said that they thought the gates could be opened! (they were those solid metal gates that you sometimes see in an industrial estate). Finally I pulled up again and some cheery guy in black leather (not!) came up and opened the gates. Without a word he let me in and then closed the gates behind him. Really strange! As he gave me no instructions I headed off to drive to where I saw cars parked and that was the only time he opened his mouth and made a comment about how I had to go park elsewhere. I guess they are used to people who have been there before but the rudeness was not necessary. Not a good start to my first experience there! Yikes at that moment I wasn't feeling too positive about my decision to drive all that way to this show.

Happily after that bad start the rest of the day was lovely. It was a nice little show and each dog had 3 runs. It was so nice to have 2 graded runs with the small dogs; I really appreciate the clubs who do that. Unsurprisingly our weeks of no training showed and I was not totally in sync with the Zitzy twins. Sadly I got an E in the graded 6 agility with Zaz and then got a 2nd place in the Graded 6 jumping. Bleh! So close! I know that Zaz will do it. She has only been shown in 8 shows since she started competing in June yet I feel as if we have been competing together forever. I just love this little dog.

Itzy and I pulled it together for her Grade 5 agility and she won it! Hurrah!!That made Itzy Grade 6. Then Itz and I went on to do two more gorgeous Jumping runs with silly mistakes. That little Itz just keeps me guessing with what she is going to do; I need her to keep me humble! Even though I have actually competed at more shows with Itzy we really don't have a complete and total understanding. I love running Itzy as there is always a little excitement involved! LOL 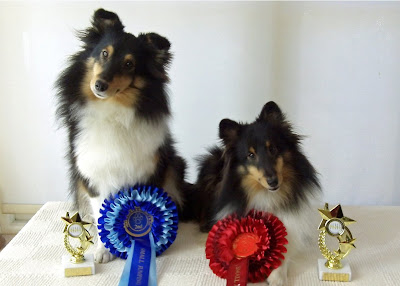 Our next adventure was going to be our trip to Denmark to visit Johanna, see some shelties and to see the Silvia Trkman training day. More later!
Posted by OBay Shelties at 5:44 PM

What a great picture!! Diana

I now remembered how lost we were when we went last time. Just like you, We go round and round the place for more then half and hour and still cannot find this entrance!